"TO BE PERFECTLY HONEST", by Phil Callaway 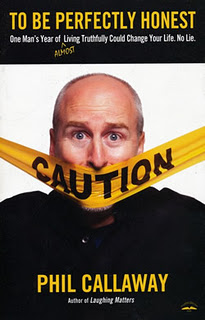 Could you be honest for one year? Now be honest in answering that question. Could you be COMPLETELY honest for just 365 days? How about 182 days? 30? Phil Callaway, a humorist, embarked on such a year-long endeavor. Any question. Any situation. Nothing was off limits. His answers and interactions with his wife, friends, neighbors, and church were intended to be completely honest whenever confronted with a situation where he -- or any other red-blooded person -- would normally be less than honest.

"To Be Perfectly Honest" was written like a documentary for the ADHD-afflicted. It was like a journal with typically brief entries where each and every day contained at least one entry. Some were longer han others, but each entry wasn't merely about truth-telling. Callaway documented the several facets of his life, including the death of his mother.

What I liked: Callaway is funny.  He's entertaining.  The idea was great.  He's a fantastic writer and he speaks very bluntly and truthfully.  What I didn't like: the scattered thoughts within the plot-less book.  It wasn't boring, but I just had a difficult time mustering up the energy to read it.  It's simply the case that I wasn't all that interested in the format.  However, I completely understand why it was written the way it was...which is why, I presume, the editor chose Callaway for this project rather someone who is more of a bore.

Sidenote: Just two days after finishing this book, I was inspired to be more honest...even in the little mundane things.  But it didn't last long.  I shop at a particular grocery store on a regular basis, and in the evenings whenever this one older gal is working, I buy her her favorite candy.  One evening, I wasn't much in the friendly mood.  I wanted to get my stuff and get out.  I saw her at her register when I entered, but I just kindof made my way by without us making eye-contact with each other.  When I finished shopping, she approached me in the line I occupied and issued a freindly hello.  I said, "Oh, Hi Patty, I didn't see you."  YES I DID!  Why did I do that?  Similar instances are documented in "To Be Perfectly Honest".

The epilogue to the book wrapped all the funny bits neatly together. There, Callaway answers what he learned most during this trial. First, he briefly mentions how exhausting it was. I think we become so comfortable with simple lies that we must fight for truth...and that is a real battle. Interestingly, Callaway notes that in his efforts to be completely honest with PEOPLE, he grew in complete honesty with GOD. How does one lie to, or try to impress, the very Creator of the cosmos? Callaway also mentions how, due to his honesty, he grew to care less about others' thoughts of him. When one grows more aware of his own flaws and weaknesses, then what does it really matter what others think anyway?

Overall, I give "To Be Perfectly Honest" 3 1/2 stars out of 5. It was a great concept, and the humor was clean and inviting. It could make for a good leisure or bathroom reader for the jokester in your family.  There are also some potent lessons to be taught/learned.


I received this book free of charge from Waterbrook Multnomah publishers (Book Review Bloggers) in exchange for my unbiased review. I was not promised reward, coerced, or threatened in any way to provide a positive review. All opinions are mine.
at 7:28 PM