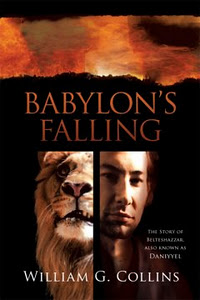 "Babylon's Falling" is a fictionalized novel based on the biblical account and history of the life of Daniel. Its pace is extremely rapid, and covers several years, beginning with the capture of Israel by Babylon, to the overthrow of Babylon by Persia, to Daniel's return to Jerusalem. Based on believed time lines, the story ranges from approximately 598 BC to 520.

That said, there are many details absent from several scenes. One of the opening scenes presents the assassination of a soldier, and Daniel arrives at the conclusion that HE was the assassin's intended target;  Battle scenes were not very thrilling and the ransacking of Babylon was not at all heart-pounding.  While  more detail would have made the read a less predictable and easier to suspend disbelief, they also would have rendered it much, much longer.  So, I guess I would have liked to see this novel in a couple installments: "Jerusalem's Falling", and "Babylon's Falling".

In this novel, Daniel is the all-wise and main character of the 4 main characters: himself, Hananiah, Mishael, and Azariah. Daniel is the highly favored one, having served as a nobleman in the Babylonian court, as well as in the Persian. The overthrows of Jerusalem and Babylon, and the treatment of the war prisoners seemed friendlier in the novel than I ever imagined them to be. You will not finish the book and think, "Wow, that was really Braveheart-esque!" or feel encouraged to be a brave warrior circa "300". It won't thrill you, but sections will intrigue and inspire you.

There are some good bits of knowledge to file into the "that's interesting" category, such as the significance of the Babylonian names given to Daniel and his 3 comrades, and the meaning of Nebuchadnezzar's name.  Another area of special interest is that Collins fills the gaps in the biblical account with very plausible possibilities.  For example, why wasn't Daniel thrown into the furnace with his three friends?  Collins suggests in the plot that Daniel was sent on assignment to Persia to learn from their wise men and sages, which is where Daniel grew in favor with King Cyrus of Persia.  According to the plot Daniel was invited into Cyrus's royal court once Persia overthrew Babylon...and then he was set up by jealous noblemen of Cyrus's royal court and was thrown into the den of lions.

There were only a few spelling/grammatical errors, and that was due to spell checker not catching correct word usage. While the words in question were technically spelled correctly, their use was incorrect. These errors didn't interfere much with readability.

Here's what I took from the book: I honestly found myself a bit (ok, a LOT) envious of Daniel. I look at his resolve to remain steadfast in his devotion to God and wonder if I could be that strong in devotion. He made up his mind to remain holy -- at all costs! I look at my life in disappointment when compared to the great holiness of this main character and his friends.  I am forced to ask myself, "Do I live the kind of life that causes God to smile on me?"  "Is God pleased with my behavior and responses to adversity?"

While I doubt this one will hit the best seller list, I don't consider it a waste of my time for having read it.  It is quite suitable for a teen or adult.  I give "Babylon's Falling" 3 1/2 stars.


I received this book free of charge through Internet download from WestBow Press, a division of Thomas Nelson Publishers, and made available through Booksneeze, in exchange for my unbiased review. I was not promised rewards or threatened to provide a positive review. All opinions are mine.
at 7:47 PM