WOULDN'T IT BE EASIER TO QUIT? 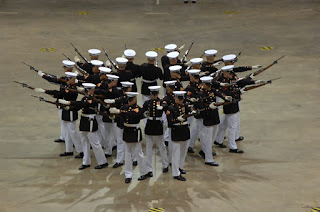 How many times do you think the Marines in this photo got it wrong before they finally got it right?

I completed it, but I wanted to quit at about day 18.
My elbows were sore with minor tendonitis.
My hands were calloused and tender.
My biceps were screaming at me.
Everything told me to quit.
I was enduring pain.
Not the kind of pain that the voice of reason says, "C'mon, stop what you're doing before this really gets worse", but the kind of pain that suggests, "Wouldn't it be easier to just quit?"

It's ALWAYS easy to quit.
Quitters quit;
not warriors.

My father is in his mid 60's and was a smoking since he was a young teen-ager.  He's a VietNam veteran.  A warrior.  He must have quit smoking two thousand times.  But on his two thousand and first try, it stuck.  He's been smoke free for almost three years now!  I'm so proud of him.  He's a true quitter!  Way to go, Pops!

May I suggest a simple solution before you make that New Year's resolution in about a month and a half.  Pick a realistic goal.  Maybe you're 100 pounds over weight.  Don't approach 100 pounds of weight loss head-on.
Instead, commit to losing just 25 pounds...and KEEPING it off.
Maybe you'll commit to that for the first quarter of the year.
Maybe it will be 6 months.
Never-the-less, make it an attainable goal.
Once you reach your goal, set another small goal in the direction of the big goal.
Lose another 25, and then another...

Otherwise, you'll have to go face-to-face with the daunting task of losing 100 pounds.  And when you have a minor setback and regain about 3 of those lost pounds, you run the risk of quitting.
Again.
Imagine if you had kept with it 4 years ago when you tried.
Where would you be today?
But don't let that stop you.
TRY AGAIN.

AND AGAIN, if necessary.

Email ThisBlogThis!Share to TwitterShare to FacebookShare to Pinterest
Labels: Encouragement