"The Judge", by Randy Singer 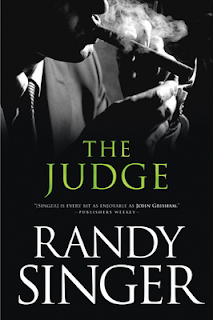 I was fired up to read "The Judge" when I saw it announced. I read Singer's "The Justice Game" and absolutely devoured it. I had high expectations of "The Judge", but was quickly disappointed by page 50 (or so).  It "fell off the table" quickly and I wasn't interested in reading it.

The main character in the story is a judge who is his in the latter stages of a crippling disease that will soon take his life. He and members of other religious persuasions (Hindu, Buddhist, Scientist/Atheist, Muslim) are invited to participate in a reality show contest located at an undisclosed island named "Paradise Island." The idea of the reality show is to pit the contestants against each other in a battle for religious dominance, whose religion stands the test and scrutiny of its doubters.

Each contestant is to defend his faith against several challenging questions posed not only by the members of the other religions, but also from the overseeing judge (not the main character). The religion that achieved the most converts (not the most votes) wins the contest.

The main character, Judge Finney, and another character grow to suspect a conspiracy, where the winner would actually be killed by a professional hit-man. Judge Finney, then, begins corresponding in coded messages with his clerk back at the office via emails. The two communicate via coded messages where the key is found in each chapter of Judge Finney's book, "The Cross Examination of Jesus Christ."

That's where I'll stop telling the story just in case you're actually interested in reading. Although I thought it was lame, I don't want to be the spoiler of the plot and conclusion.

Here's why I thought it was lame: (1)it was based on "reality television". Maybe it's just that I'm not a fan of reality TV, but I honestly thought the idea was corny for Singer. I thought the idea behind defending one's faith against other faith adherents was actually a good idea. But it just didn't work in this story for me. I could tell (even if I wasn't a Christian) that the author was pro-Christianity, and all the best arguments and rebuttals came from the Christian character (Judge Finney), and very few good arguments and rebuttals came from other religious persuasions or atheists.

It makes me wonder how much research Singer conducted in order to write a good "defending the faith" apologetics novel.  I don't know if he consulted with Muslims, Hindus, Buddhists, and Skeptics about their views of Christianity, but I don't think the issues or questions posed in the mock trials were all that challenging. He lobbed himself up some "softballs".  It just seemed like a weak, half-hearted approach.

One of the main issues addressed in the story is "a religion is tested by how it deals with death." I think this issue misses the point of the gospel, since every religion has to answer death -- albeit differently. I think a better test for any religion is how it deals with life. How does your faith help you cope with your annoying, foul-mouthed aunt, or your alcoholic, abusive father, your daughter's teenage abortion, your son's suicide, your failed marriage?