"The Reason", by William Sirls 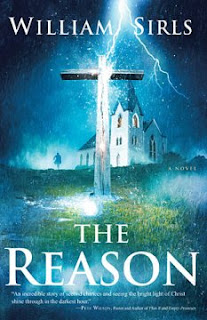 I wanted to read "The Reason" for two simple reasons.  First, one of the main characters was blind.  My son is blind in one eye, so it struck my interest.  Second, the story is set in Michigan.  I live in Michigan and used to work in Downriver area from which Sirls hails.

But it wasn't for those two reasons alone that I truly enjoyed this book.  Frequently, I put the book down to reflect on my own life, and how I would have reacted to certain situations.  I laughed.  I cried.﻿  The Reason captured my thoughts and attention from beginning to end.

STORYLINE: In a small town, Carlson, a church's wooden cross is obliterated by lightning strike.  The church is too small in number and too poor to fix it.  One of the members of the church meets some medical professionals and they endeavor to repair the cross.  The small band of comrades elicits the help of a mysterious carpenter, who shows up unexpectedly at various times throughout the book.  As the story proceeds, characters lives are changed as they struggle with items of faith and doubt, hope and reassurance.

MY STRUGGLES: I'll be honest, as I read the story, there was a part where a miraculous healing occurred.  When my son recently lost his sight, I cried earnestly for God to heal him, to restore his sight.  I had never cried so hard in my life.  As the months progressed since that time, I had learned to trust God's sovereignty in allowing my son to endure this partial blindness.  But when I got to the point in the story of a particular miracle, those emotions of heartache for my son's vision flooded me once again.  I cried, "Why, God?  Why do you heal only in fiction novels?  Why can't we be those characters and see your healing?"

It was raw emotion.  I know God heals in our world today.  But I want healing brought to my son now.  A repeated phrase in the book was, "Only believe".  I cried, "God, I DO believe!  Please heal him."  I found myself facing the similar struggles as those of the main characters in The Reason.

THE MIRE OF LIFE: I've read plenty of Christian Fiction over the years, and am usually turned off by how the main characters act as though life is a bowl of peaches and cream.  You've probably read those same fluffy novels, the ones where people have no real problems at all.  The characters in The Reason are not like that.  One is a suicidal drunk, one is a skeptical doctor, one is a proud doctor, another is a faithful mother who is smacked with doubt and fear.  The characters take on a very real form from various walks of life.  I appreciated that about this novel.

Sirls is a talented writer.  One of the characters is a young boy.  When writing from the boy's point of view, Sirls employs childish language.  This literary freedom escorts the reader into the young boy's head, and sees the world the way he would have seen it.

STORY CONCLUSION: I wondered how Sirls would conclude The Reason.  I was delightfully surprised when I got there, actually.  It was not at all what I expected!  The antagonist quietly faded into the background around two thirds of the way through the book and re-appeared at the end.  In fact, he wasn't involved in the story much, but he had a profound impact on the characters.  I found myself wishing someone would punch him in the nose, actually.  Well, the end of the story leaves the reader to his/her own imagination.  What happens to him once he receives a gift at the door from the "mystery man".  Does he die?  Is he introduced to forgiveness and change?  I think Sirls concludes the book with the possibility of writing a sequel.

RECOMMENDATION: I absolutely enjoyed reading The Reason!  It was a great, easy read.  But it had profound affect on my thought processes in wading through some of life's mire.  I highly recommend this one to all readers.  It would even be a good one to share with friends who are not believers.  Without question, I give The Reason 5 stars out of 5!