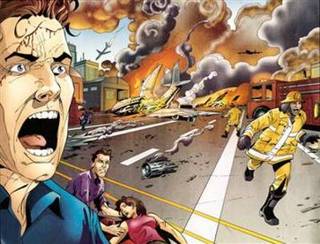 INTRODUCTION:  A group of Christian friends sat around a camp fire, and the conversation turned to the skyrocketing prices of apples and apple cider.  I jokingly commented, "...and I'll bet you pre-tribbers think this is some kind of sign that the rapture is about to take place soon, eh?"

Half of the group asked, "Pre-what?"  So a friend briefly explained the term to those wondering.  For those unfamiliar with the term, some believe Jesus will secretly "rapture" his church before a worldwide time of intense suffering.  During that description, another friend and I held our own side-bar conversation in which he asked about my eschatological views.

Many scholarly books and articles have been written on the topic, but I wanted to provide a brief, rather simplistic explanation for Daniel's 70th week.  I won't for one moment suggest I have all the pieces of the puzzle fit neatly together.  But neither will I suggest, like a blogger friend of mine, that if you do not believe as I do that your eschatological views are biblically unsound or aberrant (not the widely-accepted norm).  That would be inappropriate and wrong in this case.

Pre-tribbers suggest that only 69 weeks, or 483 years, have elapsed since that prophecy was spoken.  For some reason, they like to cut off that 70th week, suggesting that 7 years is YET to occur.  Enter Revelation.

REVELATION 11, 12, & 13: The Revelation refers to a period of great turmoil in three ways: as 1,260 days, as 42 months, or as 'times, time, and half a time' (Rev 11:2-3, 12:6&14, 13:5).  What pre-tribbers like to do, however, is suggest that somehow in those phrases the Revelation refers to a 7-year period that satisfies Daniel's yet-unfulfilled prophetic 70th week.  The problem is that this mysterious 3 1/2 year period is referred to 5 separate times.  But do these years run concurrently, or separately?  If the former, then this is only one 3 1/2 year period in which various aspects are described.  If the latter, then this totals 17 1/2 years.  Neither of which are 7.

The tribulation spoken of in Revelation lasts only 3 1/2 years.  Beginning around 67 AD, Rome began efforts to besiege Jerusalem.  They accomplished that task in 70 AD, culminating in the destruction of the Jewish temple.

THE 70th WEEK: Why chop off Daniel's 70th week of years when he makes no mention in his prophecy about a time therein when God would press pause?  He prophesies there are 70 weeks of years from the time the king of Persia would issue the decree that the Jews could rebuild Jerusalem until the time of the Messiah to come.  But he only plainly refers to 69 weeks (7 weeks and 62 weeks) instead of 70.  Hence, pre-tribbers say, "Hah!  There's one missing week!  It must be fulfilled in Revelation."

Look closely at Daniel's prophecy.  Daniel adds, "AFTER those 62 weeks the Messiah will be cut off...", which suggests the remaining week of years occurs IMMEDIATELY following the prior 69 weeks.  Daniel assumes his readers know how to count from 69 to 70.  The prophecy is for 70 weeks of years, after all, not 69.

IMPORTANT DATES:  In order to free our minds from bad math in pre-trib-ism, we need to grasp some significant dates.

First, Daniel wrote his prophetic book between 540-530 BC.  About 100 years later, Nehemiah wrote his book.  Nehemiah, then, tell us about a decree the Jews received from Artaxerxes to rebuild Jerusalem, which occurred somewhere around 450-444 BC.

Another important date that is easily overlooked is found in Luke 3: the 14th year of Tiberius Caesar.  It's significant because we can get a good idea of the approximate date when Jesus began his public ministry with His baptism.  That 14th year occurred right around 30 AD; approximately 3 years later, Jesus is crucified.

THE MAIN POINT:  The duration of time from the decree to rebuild Jerusalem until the first advent of the Messiah takes 69 weeks of years (483 years).  Remember, the prophecy continues for another week of years, or 7 years.  Read the remainder of Daniel's prophecy: the Messiah would arrive and put an end to sin and sacrifice once and for all.  It was on the Cross where Jesus cried, "It is finished!"  And from that point in time, the need to make sacrifices to atone for sin ceased.

The ministry of the Messiah begins the 70th week of Daniel's prophecy.  He would be cut off (crucified), and the propagation of the gospel into Jerusalem, Judea, and Samaria would continue for the remaining 3 1/2 years.  "The 490 years, then, would conclude with the three and a half years that remained, during which period the testament was to be confirmed to Israel (Acts 2:38)." ("End Times Fiction", p. 45)

CONCLUDING REMARKS: Regardless of whether you side with this position or preterism, partial preterism, pre/mid/post-trib rapture, pre-wrath rapture, etc, we must understand that this one is a debatable issue.  We cannot debate core teachings of scripture, such as the Trinity, the sinlessness of Christ, the sinfulness of man, etc.  But we most certainly can debate, discuss, and disagree on eschatology.  For one to say his/her eschatological view is the right one and that all others are wrong is not only arrogant, but dangerous.  So I'm not here to tell you you're wrong for not believing as I do.  I'm simply asking you to consider another very viable option.