"The Radical Question; A Radical Idea", by David Platt 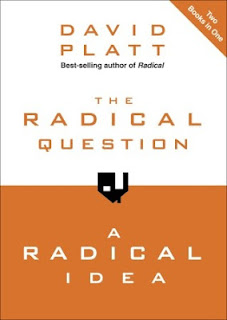 If you haven't read "The Radical Question" yet, I wonder where you've been.  This little book was made available for free in 2010, and could be read in 30 minutes.  But have no fear!  "The Radical Question" has a second half, "A Radical Idea", and the two are now combined into one hard-cover book.  This great combo can be read in under one hour.  Perfect for the busy reader.

The book measures only approximately 4"x7" and is 110 pages long.  It's absolutely perfect because it focuses on one singular idea of radical devotion that packs a heavy punch.  And the punch leaves the reader thinking and challenged.

THE RADICAL QUESTION:  Part 1 is "The Radical Question".  The idea behind it is how the biblical gospel affects individual lives.  How do we get from being stagnant pew-fillers to active Christians who live the gospel in our daily lives?  "We in America have lost touch with what is essential, radical -- even dangerous -- about our faith and replaced it with what is comfortable" (p.8).  There seems to be an overwhelming difference in the Western version of Christianity and the Christianity that prevails among our brothers and sisters around the world (p.9).  We drive expensive cars to expensive church buildings and sit in cushioned pews or chairs while many Christians around the globe are walking miles to meet in secret huts and sit on dirt floors because they are forced to meet in secret.

Could we be more responsible with our time, talents, and resources?  Or are we satisfied with a nominal devotion to Jesus while we pursue the Christianized American dream?  "What is Jesus worth to you?" Platt asks.  Is he worth death?  Worth radical devotion?  Platt inspires the reader, "Of course he's worth it.  The cost of non-discipleship is far too costly."


A RADICAL IDEA:  Part 2, "A Radical Idea", keeps punching.  The idea behind it is what happens (or can happen) when the biblical gospel is radically lived out in our faith communities.

Platt brings a full frontal assault on our American version of "church" where a single, gifted (or not) speaker "feeds" the flock.  At the conclusion of the message, the flock leaves the church and goes about its daily routine, largely unaffected and uninspired to reach out to the lost.  In contrast, the biblical gospel's aim is "...always for all of God's people to be equipped and empowered to lead as many people as possible to Christ" (p.69).

Platt seems to present a pretty big push to return not only to the house-church model, but to real service.  What would Christianity look like if more people rubbed elbows with the poor in their community, feeding them at homeless shelters, teaching the illiterate how to read, etc.  Instead, it seems today many Christians are satisfied living comfortably, writing checks and throwing money at our social needs.  There is certainly a place for money-givers, but do we have too many of them and not enough do-ers?

Recommendation: I highly recommend not only this combination book to you, but I highly recommend David Platt to you.  He doesn't merely write from behind a mahogany desk; He gets out there and gets dirty.  Platt spoke at the 2012 "Together for the Gospel" conference, and he has a heart of gold.  He doesn't just ask how to send missionaries, but how everyday, ordinary people like you and I can live the radical gospel in our daily communities.

I give Radical 5 stars out of 5!  If I were allowed more stars, I would give them.