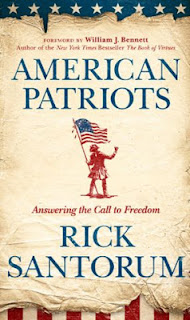 "Give me liberty, or give me death", Patrick Henry once said.
Thomas Jefferson lauded, "Life, liberty, and the pursuit of happiness."

These are the characteristics that make America great, but they didn't come cheap or easily.  They were purchased through turmoil, blood, and even death.

Senator Rick Santorum takes us back in time to the founders of our nation, to the stories of those brave men and women who forged ahead at the time of the American Revolution -- the 1770's and 80's.  It's likely you won't recognize many, if not most, of the heroes named in this book.  But like me, you'll likely be inspired by the courage and honor our founding mothers and fathers showed in the face of great controversy.

DESIGN: For starters, I absolutely love the design of this little book.  The pages are printed to appear as old documents that one might have found in an attic somewhere.  At the beginning of each of the three main parts is a reprinting of an artist's rendering of monumental events in American history, like the pictures in your high school history books.  Each of the three main parts follows the themes, "Life", "Liberty", and "The Pursuit of Happiness", and the stories of the heroes fit into those general themes.

DIGGING DEEPER: The stories of these great men and women caused me to ask of myself, "If I had lived in the 1770's, would I have been so courageous to stand up against the British empire and fight for my or my loved ones' freedom?"  "Would my name have been found among the great heroes of time?  Or would I have been an average commoner?"

What's great about these stories is that they are about average commoners, but common patriots who went "above and beyond" at crucial moments in history.  The movement of the American dream began to stir, and they joined the cause.  As has been said, "Heroes are not born, they're made."  That means you and I have the opportunity to change the world.

Another thought came to mind as I read these stories.  The people under British rule desired to fight for freedom, but it required turning against their government in what would amount to treason -- and treason was rewarded with sure death.  Surely we believe today what these patriots did then was right.  They stood up to an oppressive regime and earned freedom.  But isn't there a fine line between being a Revolutionary and a Traitor?  It seems one is considered a Revolutionary if the cause prevails, but a Traitor when it fails.

WHAT WOULD YOU DO?  What if Americans -- grieved over the direction of our country -- began a revolution today?  Would you fight for it, or against it?  Would your name be found in a book of Traitors, or a book of Patriots?  I wonder if that's how these courageous men and women felt.  Nevertheless, they had convictions, and they stood up for them.  Live or die, that's what made them great.

If history repeats itself, then we are at a crucial time and place to take action, to direct our country back on the track with biblical and moral standards.  We have not ardently guarded the right to "life", but instead have legalized the slaughter of the innocents.  Rather than protecting our great liberties, we are slowly watching them erode.  Freedoms of speech and press issues seem to make the news on a regular basis.

After reading about what these patriots did for us, we cannot simply sit back and watch life happen.

RECOMMENDATION:  I give "American Patriots" 4 stars out of 5.  I thought it was well written and inspirational.  The book is short enough to serve as a weekend read, and brief enough to create thoughtful impact.  This one would be a good gift for history lovers.