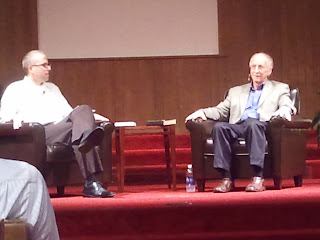 Last week, I had the privilege to sit in on a Q&A with John Piper, hosted by Kevin DeYoung.  The forum was informal, and Kevin did a great job bouncing all kinds of questions from various topics off John's mind.  One of those topics was politics.

So Kevin asked John whether or not he would vote in the up-coming election.  John explained why he WILL indeed vote, but briefly mentioned Thabiti Anyabwile's article about NOT voting.  Simply short, John disagreed with Thabiti's rationale.

But one of John's follow-up comments struck me as odd.  It didn't cause me anger, but instead surprised me John would say what he said...   "I cannot support anyone who endorses that which sends people to hell.  That's not good."

I was surprised because John has addressed this very issue in one of his books, "The Pleasures of God".  This is no surprise to him; It wasn't a trick question.  I thought, "But John, didn't you say/imply that people go to hell SOLELY because they reject the beloved Son of God, and not for any litany of sins -- no matter how great or small or long -- anyone has committed?"

Just to be sure I didn't miss something, I reviewed in my mind and in the bible what the bible has to say about this.  Did Jesus ever say there was a particular sin or group of sins he would/could never forgive, sins that would send people to hell do-not-pass-go-do-not-collect-$200 style?

One place came to mind...ONE!  Oh no!  I hope I haven't committed it.  I don't think I have, but I figured I'd look into that one just to make sure.  I certainly didn't want to offend my Savior enough that I didn't receive his mercy.  I've offended him enough, I can't imagine pushing him over the "edge", so to speak.

So I looked deeper, looked at the most trusted source of all, Youtube.  Just kidding.  Actually, Mark Driscoll (if he's not on your iPod playlist, he should be) came to mind, so I wanted to hear if he had anything to say about the subject, one very particular sin that is entirely unforgivable.  To my delight, a clip existed of him speaking on this very topic.

To blaspheme the Spirit of God is unforgivable, for it is the Spirit who brings us to a point of deep conviction about our sin and our position apart from God.  To continually reject His conviction and promptings to turn to Christ -- and then die to face God in judgment -- is unforgivable.  The hands of the clock cannot be moved backward, there is no second chance.  There is no purgatory to get things right one last time.  It is finished.