I WOULDN'T WANT TO BE THE KICKER: 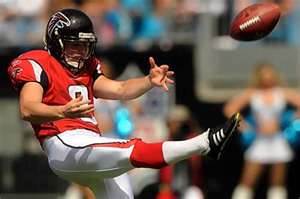 As Baltimore Ravens' Jacoby Jones was in the process of returning Pittsburgh Steelers' Drew Butler's punt for a 66 yard touchdown, Al Michaels made a hilarious and most profound comment, "...he's got one man to beat...and that's the kicker."

Shortly thereafter, Jones was easily in the end zone.

What's with kickers' reputation, anyway?  I honestly wonder if "real" football players even consider kickers to be "real football players".  Do they respect them?  Or simply tolerate them?

Here's the hilarity of kickers...

1) Kickers can't run.  When they do, they look like a documentary on Discovery Channel of a newly-birthed horse trying to trot for its first time.

2) Kickers can barely tackle -- anybody.  When they attempt tackling, they ALWAYS fall to the ground and roll for about 1 or 2 yards (and it's only 1 or 2 yards because they're not running that fast...see #1).  Hey, they've gotta make it look like they're making an effort.

3) Kickers are called upon only a few times per game, and are REQUIRED to kick the ball between the uprights or deep into the opponent's territory.  If they do, well, that's their job.  If they don't....C'MON, WE ONLY CALL ON YOU ONCE IN A WHILE!  COULDN'T YOU DO IT RIGHT THIS TIME?"  Seriously, that's a lot of pressure.

4) Kickers always have to "take a fall" whenever an overly aggressive defender attempts to block their kick.  Just sneeze on them the wrong way and they fall to the ground like corn muffins thrown to the ground by a toddler.

5) Kickers get absolutely no respect...not from fans, players, or commentators.  They are mocked as the team weakling.  (See Al Michael's comment above...)

6) Kickers' facemasks are usually pretty silly looking and they wear itty-bitty shoulder pads.  That alone proves they're not in the sport for the physicality of it. 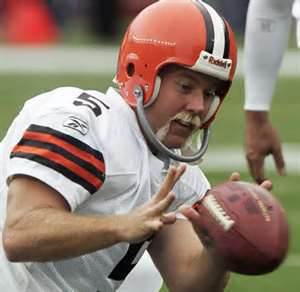 Here's a blast from the past...Remember when future Hall of Famer Peyton Manning said the following about Mike Vanderjagt in 2003, "Here we are," Manning said. "I'm out at my third Pro Bowl, I'm about to go in and throw a touchdown to Jerry Rice, we're honoring the Hall of Fame, and we're talking about our idiot kicker who got liquored up and ran his mouth off. The sad thing is, he's a good kicker. He's a good kicker. But he's an idiot." ?

Although comments Vanderjagt made were deserving of some backlash, one gets the feeling from Manning's comment that kickers are in an altogether different caste system, that they are at the bottom of the pecking order when it comes to NFL athletes.  After all, I can't imagine someone calling Ray Lewis or James Harrison "idiot linebackers".  It just doesn't fit.

Poor kickers.  I feel sorry for you, but I wouldn't want to be you.

**Note**  Once I finished this post and clicked "publish", I signed out of blogger and clicked on a Yahoo! article, which featured this title, "NFL Speedster won't soon live this down".  I clicked on the link to the article and found the following headline, "Texans punt returner gets run down and tackled by the punter".

So, apparently not even the media respects kickers!

But I will give Jacksonville punter Anger credit, he ran hard and he executed a textbook tackle. So I guess things really could be worse.  One could be the guy who actually gets tackled by the kicker.
at 10:10 PM