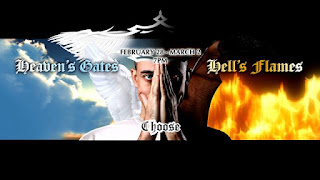 I had the privilege recently to attend a production of "Heaven's Gate & Hell's Flames" at a nearby church.  The final product was good and it served its purpose in forcing the issue of final judgment into peoples' minds.  It is something we frequently ignore, but something which needs to be considered.  Carefully. 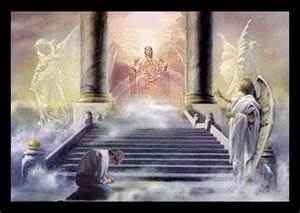 I have some reservations about criticizing anything that inspires/scares/encourages people to consider their own mortality and fate before a God who will one day judge us. But I have an even greater difficulty allowing this version of judgment to go unchecked.  In the end, it wasn't actually very biblical.

My critique is not of the actors, their effort, the story lines, or anything else on the local level.  Instead, this is a critique of the program's theology.  As a side note, I saw the same production when I was a young boy, and it frightened the hell out of me!  I didn't have even a basic understanding of theology then, but I have a vivid memory of the program.  And in comparing the two productions -- then and now -- it appears the program's theology hasn't changed a bit.  Here, I'd like to offer just 5 critiques.

#1 - My biggest concern with HG&HF is that God the Father, the Righteous Judge was absent.  Jesus was there, but the Judge was not.  Jesus was there as a participant, but not as Judge.  The program began with a chilling reenactment of Jesus' crucifixion, followed immediately by His resurrection and glorification.  It was chillingly great stuff!  Sadly, Jesus was relegated in the program to hanging out back stage.  He would simply appear from behind the curtain (which served as the entrance to heaven) and provide a hug and an escort for the repentant sinner past the judgement seat of....an angel.  (See #3 below for further on this.) 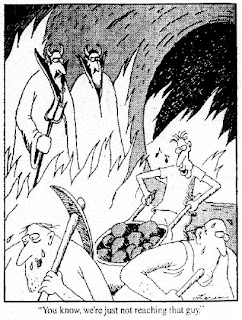 #2 - Which obviously leads to my second issue.  The bible speaks of a Judgment seat of Christ, not of an angel.  I would have been ok with God sitting on the throne and an angel holding the book.  But, as already mentioned, God wasn't there.  We will not one day stand before the judgement of an angel's throne.  Unfortunately, however, it appears that The Far Side's version of St. Peter sitting at the entrance to heaven holding the judgment book (the Book of Life) has infiltrated the Church and taken root.  Instead, Revelation 20 reveals God sitting on His great, white throne, the heavens fleeing from His presence, and the book of life being opened before Him.  Not before an angel.  There is not even a biblical inference to an angel being the guardian of the book -- only Christ.

#3 - Once the angel in HG&HF pronounces the judgment upon the sinner (that his/her name wasn't found in the book of life), Satan enters the scene mocking, thanking, and dragging the condemned sinner into the flames of hell amidst howling laughter.  Once again, the bible speaks nothing of Satan being the one who drags/throws a sinner to hell.  Instead, it is God who pronounces judgment and determines the sentence.  It is God who will throw the sinner into hell (Matthew 10:28), not Satan.  The bible does not depict Satan as an executioner, but only as an accuser.  He stands beside the judged, levying accusations against the sinner (See Zechariah 3).  However, Jesus is also there defending the soul made righteous.  That's not the case in HG&HF, however. 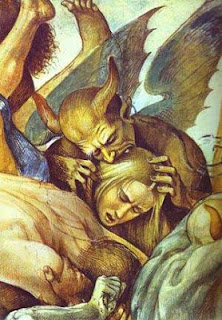 #4 - Satan is not the god of hell, as Greek mythology and The Far Side would have us to believe.  He does not stand with a pitch fork on a fiery rock, enjoying the flames, welcoming the condemned.  The Greek god Hades was the god of the underworld, but Satan is not such a figure, according to the bible.  Hell is not Satan's hell; it is God's hell.  God created it.  He intended it for Satan's punishment, not for Satan's use as a torture chamber for the condemned.

#5 - Satan is not said to be currently in hell.  He dreads it; demons dread it.  Remember the account of Jesus casting the demons into a herd of swine because they pleaded and begged with Jesus not to condemn them to the abyss so soon?  They have no desire to be or go there.  Satan and his fallen minions were cast out of heaven to earth -- not to hell (See Revelation 12).  They are not there sunbathing in the flames, tormenting people, peeling their skin with knives, biting their necks, etc.  Rather, they roam the earth tempting and occupying before their final judgment.

There were many good things about this production.  I would like to see it again once their theology is corrected.  Please help me if you have any additional observations, comments, or corrections.
at 9:29 PM