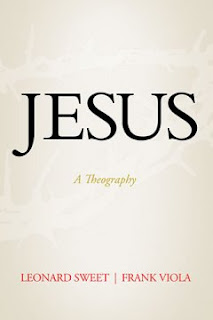 John Piper once said, "Entire books don't change lives; paragraphs change lives."  If that is the case, then this book had a lot of those paragraphs that could be considered life-changing.  At 310 reading pages of heady reading and 82 pages of notes (or "works cited"), I would consider this title more of a volume than a mere book.  A "theography" is not merely a biography, but a theography about the God-man, Jesus.  So paragraphs to inspire life-change are aplenty in "Jesus, a Theography".

INITIAL CONCERNS
Before telling you what I really liked about this book, I have to warn you that Sweet and Viola employ some terms and phrases that are new-age'ish, in my estimation.  For instance, on pages 13-14, they write, "...Jesus is God's own knowledge of Himself"; "When that self-knowledge becomes incarnate in the flesh of the man Jesus..."; and "...Christ is the knowledge of God." (p.19)  These phrases concerned me because I wondered immediately if the authors believe Jesus truly is a real member of the triune God-head, or if he is just some mysitcal essence of spirit or self-actualization.

Another comment made on p. 42 concerned me, and that was in the authors' description of the creation account and a section entitled, "the Garden of God's temple".  They write, "This is why God 'rested' on day seven, a verb that is used almost exclusively in ancient Near Eastern literature to describe how divine beings take up residence in their temples."  A statement like this is concerning to me because it could lead readers to believe that Yahweh-God is simply one God among many gods, and that they all share similarities in how they interact with their creation.

On pages 52-53, the authors write, "Jesus probed the limits of what it means to be human, enabling us to become fully human ourselves and thereby to participate in Jesus' divine life."  Additionally, "In coming to know Jesus, we come to know God, ourselves, others, and creation."  I asked my wife what she thought that meant, but we couldn't come up with anything.  Statements like these simply sound like they're quoted right from the new age encyclopedia.

WHAT I LIKED
Ok, enough warning about the new-age approach, as there were other areas of smaller concern.  But after chapter 3 concluded, those types of statements seemed to drop off the map, which made me wonder if I should read the remainder of the book from the new age mindset.  I chose, instead, to read the remainder at face value.  After all, if all truth is God's truth, then there was certainly truth to be gleaned from the remainder of the book.  Not only that, I agreed to review its entirety.

Sweet and Viola spent a ton of time discussing the parallels between what they call the First and Second Testaments (i.e., Old and New).  C.J. Mahaney once exhorted preachers and teachers to take their selected text of scripture and conclude it at the Cross.  In other words, Jesus must be seen -- and be the focus -- in the entirety of scripture.  And that is exactly what Sweet and Viola aim to accomplish in this work.  They do not simply spend the bulk of their time in the Second Testament, focusing on just the "red letters".  Instead, they journey through the entirety of the bible -- cover-to-cover -- and point their readers directly to person of Jesus Christ.  Sadly, only a chapter was given to discussing the great work of our Savior at Calvary.  But the authors never intended this work to be one focusing on the work of redemption; only a theography.

The authors pointed out and discussed so much biblical symbology that it became overwhelming.  However, I wonder if the vast use of symbol is something that is largely overlooked or ignored by Christians today.  We must remember, the bible is God's story and He perfected all the details.  We may be uncomfortable with the vast usage of symbol and parallels, but God loves detail.  Just examine the ground very closely and notice all the small bug life.  Then gaze upon the vastness of the heavens or the oceans, all teaming with design and life.  God truly enjoys detail, so His wide use of symbol throughout His story should not come as a surprise to us.

THE BEST CHAPTER
By far, the best chapter in this work is chapter 6, "Jesus' Preparation for Ministry".  In that chapter, Sweet and Viola provide commentary on "the missing years" of Jesus' life.  I found several ideas thought-provoking.

For instance, "The artisan from Nazareth who worked with stone was the very person who created stone with the words of His mouth.  The iron in which His tools were crafted was extracted from the ore that He created.  The water that so refreshed Him when He perspired in the scorching Eastern sun was the water that He Himself spoke into existence.  And the wood with which He was so familiar, the material upon which He would one day be crucified, came from His own hands.  The Second Testament states five times that Jesus died on a tree.  And not only were trees all created by Him, but they were created for Him" (pp. 98-99).  This was, for me, one of those Piper-esque, life-changing paragraphs.

For example, as an artisan, Jesus likely sculpted stone or carved wood creations for people in his town.  Townsfolk probably hired him, and maybe even referred him to their friends due to his quality of work.  But given the nature of sinful human beings, some of Jesus' customers may very well have complained about his work, no matter how good the work may have been completed.  Let's face it, some people are just not happy unless they're not happy.  If Jesus was in all ways tempted as we are, it is quite possible that Jesus was tempted to "tell off' his false accusers.  But in his quiet time with his Father, it is also possible that those were the times Jesus learned to do all work as if doing it for the Lord.  Similar lessons could have provided the backdrop for those teachings he would hand down to his followers.

RATING
Overall, I liked "Jesus: a Theography".  However, I took serious issue with a largely new-age approach in the first three chapters.  As mentioned earlier, "younger" believers might have some difficulties reconciling that approach with orthodoxy.  However, there is a lot of good contained within this book.  And the good is highly useful.  Therefore, I give "Jesus, a Theography" 3 1/2 stars out of 5.