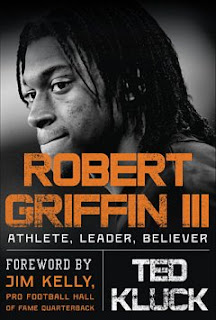 Anytime an author writes a book about sports, it's instantly a work of history -- even if written contemporaneously with the events (the same is true for politics.) -- and I cannot imagine it is a very easy genre to author.  Likewise, biographies must be equally difficult.  So when an author attempts to merge the two in one book, he takes on a grand challenge.  "Robert Griffin III: Athlete, Leader, Believer" is one of those books.
In the early pages, Ted Kluck introduces his modus operandi: He writes ABOUT Griffin as events occur, as if he's giving you -- a listener at a round-table conversation -- a play-by-play of RG3's life.  Kluck details how Griffin grew into the athlete, leader, and believer he is today.
He describes how RG3 grew up with parents who pushed him to excel and to be a person of upstanding character -- both on and off the field -- from a young age; He describes how, although he is a young player in the NFL, RG3 would prove himself to be a natural leader.  His leadership did not appear by self-assertion, but by humbly displaying his on-field worth.
Each chapter focuses on a specific aspect of Robert Griffin III's football life -- from recruiting, to performance, to future successes, etc.  However, it's not all about RG3 only.  Instead, Kluck brilliantly weaves the stories of other NFL athletes into the fabric of RG3's story so as to make the story more fan friendly, interesting, and readable.
What lacks in this book (for good or for bad), however, is the heavy religiosity one would expect in a book written about a Christian athlete for a Christian publisher.  Kluck didn't get into Griffin's theology.  Not a bit.  So, if you're looking for that aspect of Robert's life, you won't find it here.  What he does very gently and carefully, though, is compare Griffin and the NFL's love-to-hate evangelical, Tim Tebow.  Kluck allows his readers to decide which athlete is making a bigger impact on his football society -- an unashamedly outspoken, walk-the-straight-and-narrow athlete vs. a humble, quiet leader who isn't in-your-face with his "religion".  (That's simply one small section, and not indicative of what the entire book is about.  However, I know you're likely wondering.)
At the end of the day, though, this is a book written by an NFL fan for NFL fans, especially Robert Griffin III fans.  Kluck is an excellent author who writes very strategically and professionally.  I would recommend this book to die-hard Redskins fans and RG3 fans.  It would be a great gift for someone who is not a follower of Jesus who needs to see proof of a positive role model in modern sports, but not be "preached at" at the same time.  Readers will not find a presentation of the gospel of Jesus Christ within these pages.
Rating: For the previously-stated reasons, I give this book 4 stars out of 5.
Disclaimer: I received this book free of charge from Booksneeze (Thomas Nelson Publishers) in exchange for my unbiased review of it.  I was not promised rewards or threatened otherwise in order to provide a positive review of it.
at 5:48 PM