"Wrestling with the Devil", by Lex Luger 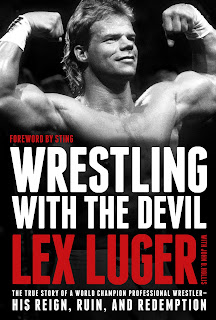 If those names are familiar to you and strike a memorable chord with you, then this book may very well be for you.  I grew up watching WCW, WWF, and NWA on Saturdays after my paper route.  I watched the cartoon and even bought some of the large, rubber action figures.  I had my favorites and I anticipated the cage matches.

But there was one wrestler who was at the top of my list of favorites – and I do not say this because I received the book.  Instead, I requested the book BECAUSE he was my favorite.

Just the name brings back fond memories.  I remember the black trunks and boots.  I remember looking at his physique, which was my early introduction to the world of chiseled physiques.  I all-around enjoyed watching him.

And I thoroughly enjoyed reading his book.  Born Lawrence Pfohl, Lex Luger broke into the professional wrestling scene as a top performer.  But his path to success was fraught with pitfalls, most of them self-made.  Lex was an athlete who had the potential to have a successful NFL career, but it would never be.  He virtually ruined his chances as a trouble-making college athlete, and that path directed him toward professional wrestling.

But it wasn’t until his wrestling career took off that Lex’s lifestyle caught up with him.  Sinking in a world of drugs, alcohol, women, and money, it’s what God used to capture his attention.  Finally.

While serving time in jail, Lex met a chaplain.  At first, Lex only used the chaplain to get out of his cell for a while.  But after a while, he began to grow on Lex.  After Lex’s release from jail, the pastor pursued Lex without badgering him about Jesus Christ.  Finally, one day Lex began asking questions, and that’s when the floodgates opened!

Today, Lex Luger – Lawrence Pfohl – is a follower of Jesus Christ, telling his inspirational story to others who find themselves struggling with handicaps and addictions.  “Wrestling with the Devil” is inspirational in the fitness realm, but is even more inspirational in the missional realm.  It raised important questions in my own mind, like:\
- Do I befriend people for right reasons, introducing them to Jesus along the way?  Or do I evangelize “drive-by” style?
- Am I committed to make lasting life changes, and inspire others to do so as well?
- Could I love a person out of their addictions, even if I was mistreated or “used” in the process?
-  Do I have my priorities in order, or do temporal things occupy my commitments?
Rating: I loved this book.  I was inspired in areas of physical fitness, evangelism, and personal growth.  This title captured all three elements very well.  Kudos to Lawrence "Lex" on this one, and thank you, Lex, for letting me peek into your world.
Disclaimer: I received this book free of charge from Tyndale House Publishing (Blogging for Books) in exchange for my unbiased review of it.  I was not promised rewards or threatened in any way to provide a positive review.
Contest:  So, you really DID stick around to read to the end of the review.  Here's the bonus.  Do you want a free book?  Were you a fan of Lex Luger?  Do you know someone who was?  Maybe you're interested in physical fitness, or even creative ways to reach out to others in need.  If so, I have a coupon for one FREE copy to give away!  There are no strings attached, no gimmicks, nothing.  Just straight-shooting.  Simply leave a thoughtful comment or insight on this review, and I will pick the most interesting/inspiring, etc. and send you the coupon in the mail, courtesy of Tyndale House Publishers.  I will announce the winner and then make mailing arrangements from there. 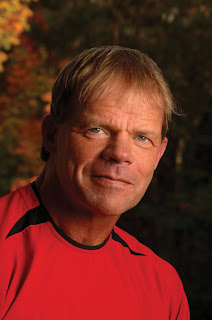