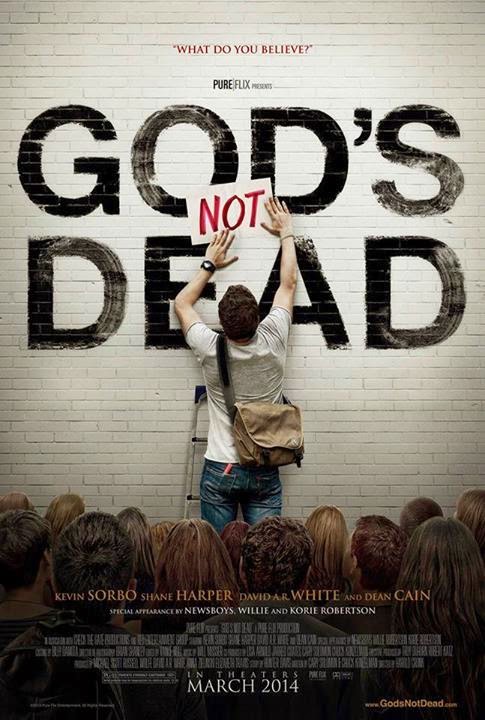 "God's Not Dead" has captured the attention of our society -- especially Christians -- and its contents are worth discussion.  I'd like to point some aspects I liked and a couple I didn't.  I'd love for you to share your thoughts at the end, as well.  I wanted to wait to post these after giving people some time to see "God's Not Dead" if you were planning to see it.  By now, I imagine you have if it was in your plans.  If you have not yet seen the movie and don't want to be disappointed by these reflections, please feel free to wait to read this until you have seen it.

LIKES:
1) It was great to finally see a movie in which men are not bumbling idiots and the target of all things mockery. In this movie, the main character, Josh Wheaton (played by Shane Harper), is an intelligent, strong young man who makes the decision to courageously stand up for what he believes is right.  My point is not to argue the validity of what he stands up for, but that he stands up for it.  Far too often in our world, people (myself included) are afraid to say or do what is right for fear of what others may think, or even out of respect for others' feelings.  It's a difficult line to toe, but the movie drives the point home: be courageous and do what's right -- even when it's difficult to do so.

2) I thought the argument for the existence of God was pretty good.  Sure, we'll all have conversations with naysayers who cite this or that belief about creation, but shoot, even we believers can't seem to agree on a theory of creation anyway.  As it stands, we have "young earth" vs. "intelligent design" vs. "evolutionary creation", etc., so we're obviously not going to settle the debate with the rest of the skeptical world in a brief 90-minute movie.

That said, there were still very good arguments posed for the existence of God. I would like to have seen more back-and-forth dialogue and rebuttals from each side, or in the case of the movie, from the atheist Professor Radisson (played by Kevin Sorbo).  Why?  Because that's real life.  Unfortunately, the movie made it appear that the pro-God argument is a slam dunk for Christians/theists, and they did this by having the entire class stand up at the end of the movie professing their minds had been changed about the existence of God.  Another reality is that there are some intelligent people who are our friends and authors, who have very good arguments supporting their beliefs, and whose books many of us overlook.  While I may not agree with their points, they're out there still the same.

My hope is that this movie will get Christians interested in this conversation, and preparing by reading up on it.  It's good for us to become at least remotely acquainted with others' viewpoints, no matter how much they differ.  But if we are looking to simply file away slam dunk arguments to win the "battle", we may very well come up short.  If/when we get into these conversations, we have to remember to do it with the right attitude -- RESPECT.  This movie has, at the very least, sparked some interest in dialogue, and I hope more Christians/theists will read more about it -- yes, even books written by prominent atheists like Dawkins, Dennett, and Hitchens.

3) It is refreshing to finally be able to watch a Christian movie without having to endure the talent of a 5th grade talent show.  The quality of acting and production have improved dramatically over the past decade. We've demanded it, and "Hollywood" has delivered it...so go out and support it.  Otherwise, we may keep getting junk.  You may disagree with some of the contents, but isn't that true of any movie we watch?  Movies like "Courageous", "Love Dare", and "Fireproof" come to mind as good flicks with great acting and impact.

DISLIKES:
1) The creators of the movie made non-believers look like mean, rotten ogres.  Guess what...they're not all like that.  Just like all us Christians are not perfectly loving and accepting, non-believers are not demons in skin-suits.  A dear friend of mine is atheist, and he's far from being a mean-spirited jerk.  I used to work with an atheist, and I have another Internet acquaintance who is an atheist.  None of them have the characteristics displayed in the movie.  My good friend is intelligent and he enjoys these types of conversations -- and we've had them many times.  You probably have similar relationships with your co-workers, friends, and family, and I hope you are able to agree that most of them are not the mean-spirited souls the movie paints them to be.

For example, Professor Radisson hated God for what He did to his dying mother when he was a young boy; Mark (played by Dean Cain), a wealthy, prominent business man suddenly turns heartless when his girlfriend, Amy (played by Trisha LaFache) announces to him at a dinner engagement she has cancer; the Muslim father, Misrab (played by Marco Khan) is an over-bearing father.  While these characteristics may be true of some people, I think the producers did an injustice by not having any likable antagonists.

We ought to be gracious to those who do not believe as we do.  How does that one phrase end..."in all things charity" ?

2) Why do Christian movies ALWAYS have to end in everybody coming to Jesus?  I know it is a dear hope of ours, but it's not very accurate -- theologically or realistically. Professor Radisson had a sudden end-of-life opportunity (which he obliged) to trust Jesus Christ; Amy's cancer made her an overnight believer; and Mark kindof realizes what a turd he's been.  Everything came to a nice clean ending, and this aspect frustrates me most -- because it's not realistic.

I have had many opportunities to lead people who were in their lowest depths to Christ (given my line of work), so I am all-in when it comes to enjoying the saving work of God in a person's life.  Somehow, God miraculously lavishes His grace on us sinners and saves people at unexpected times.  However, there are equally many more times when people continue in their rejection of God -- for whatever their reason. Sharing the gospel and saving faith are not always so easy and "clean-cut" as the movie pictures.  That can cause a real frustration for well-meaning Christians who hope for the best from their conversations with unbelieving friends and family, but who don't see immediate results like the movies display.

We ought be faithful not only to speak the gospel into our world, but also to live it.  Some may respond quickly, while others may never respond.  Our role is simply to be faithful to the truth in our speech and conduct.  I hope to encourage you to do so courageously, and I think that is the focus of the movie.

3) Finally, (and this is not movie related) the theater I was in was PACKED with Christians -- and it was left in complete and utter disarray.  When the lights came on, I saw trash, food, wrappers, spilled drinks, popcorn, napkins, and cups all over the theater!  No joke.  For a movie that apparently had just inspired Christians to enter into dialogue with unbelievers, they sure didn't start by cleaning up their garbage.  It doesn't matter if it is a movie theater and it's an attendant's job to clean it up -- we ought to be respectful and responsible with our trash and the little slice we occupy.  It was unutterably distasteful, and I was appalled at what my brothers and sisters in Christ left in our wake.

CONCLUSION:  All that said, I thought "God's Not Dead" is a movie worth seeing.  I hope people will show some grace, because, after all, Christian movie producers have it hard -- they want to produce and we want to see watch-able Christian-themed flicks.  But just when they provide them, Christians start complaining about this or that, like theology or any other litany of arguments -- "There wasn't enough of the gospel"..."There was too much of the gospel"..."They make it look like people are saved by works"..."They made it look like saved people can sin however they want"...etc. etc.

I encourage you to go see it.  Enjoy it.  Read some books.  And dive into dialogue.  Because we never know what just may become of it.