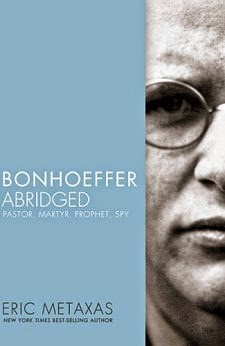 INTRODUCTION: Dietrich Bonhoeffer, a Christian pastor in Germany during the rise of the Third Reich, was killed for his opposition to the regime.  Born in 1906, and turning to Christ at a young age, Bonhoeffer entered pastoral ministry, and stood firm amid persecution.  In the early '40's, he humbly and courageously accepted his fate that was held by the gallows.  This is his story in abridged format.

REFLECTIONS: I have mixed feelings when I read biographies like this one.  First, I am discouraged by the eerie shadows of history looming over us, as if history is waiting quietly to "repeat itself".  On the other hand, I am encouraged as I enjoy peering into the lives of courageous men and women who have refused to bow their knees to the tyrant-du-jour, despite facing real threats of execution.

Nazi Germany issued harsh ordinances against Christians, forcing allegiance to the Hitler and his Reich (p.119).  Those who rejected it were rewarded with death, while those who paid it allegiance did not fare much better. Still, while many acquiesced, some remained faithful to the gospel of Jesus Christ.  Dietrich Bonhoeffer was one of them.

There seems to be a common thread found among the message of the persecuted in Jesus Christ, and that is the deep faith they have in their Lord.  When Bonhoeffer fled to America in the early 1930's, attempting to find relief from persecution, he wrote of the American church, "In New York they preach about virtually everything; only one thing is not addressed, or is addressed so rarely that I have as yet been unable to hear it, namely, the gospel of Jesus Christ, the cross, sin and forgiveness, death and life" (p.43).  The Church that waters down the message of the gospel faces certain risk of death.  The German church allowed it to happen then, and the American Church has been doing it since.  History suggests that it is only a matter of time before Christians in the West face similar oppression as those under the hood of the Third Reich.

In 1937, "more than eight hundred Confessing Church pastors and lay leaders were imprisoned or arrested" (p.112).  And "In Berlin, the Confessing Church planned a service of intercession...two hundred and fifty of the faithful were arrested..." (p.115).  Since the early days of Christ's Church, persecution has only strengthened its resolve against evil.  The Christian under these pressures "must obey God rather than men" (p.113).

I was most encouraged by one of Bonhoeffer's statements near the end of his life: "To be sure, God shall call you, and us, only at the hour that God has chosen.  Until that hour, which lies in God's hands alone, we shall all be protected even in greatest danger" (p.145).  What a tremendously powerful proclamation of the sovereignty of God, and it ought to encourage the faithful.  No matter what evil men may conspire against the Bride of Christ, nothing will come other than that which is at God's direction.  Bonhoeffer's words are in line with God's word: "no harm will befall you, and no evil will come near your tent" (Psalm 91).

As death loomed over him, Bonhoeffer was a man who was faithful to the end.  As he was led toward the gallows, Bonhoeffer quietly said to his fellow captives, "This is the end.  For me, the beginning of life" (p.208).  Reflecting upon Bonhoeffer's death, one camp doctor concluded, "I have hardly ever seen a man die so entirely submissive to the will of God" (p. 209).  O, when my day arrives, may those words be said of you and me.

RATING: I give "Bonhoeffer Abridged" 4 stars out of 5.  I was a good book -- not a "page turner", but certainly worth my reading time.

DISCLAIMER: I received this book free of charge from BookLook Bloggers (Thomas Nelson Publishers) in exchange for my unbiased review of it.  All opinions are mine; they were not forced upon me.  I was not promised anything in exchange for a positive review.
at 9:29 PM