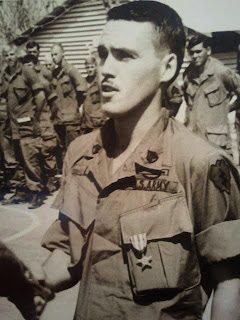 From 1968 to 1969, my dad fought for others' freedoms in a country literally on the other side of our world -- VietNam.  For many years after the war, he tucked away the stories, thoughts, and emotions.  I didn't come to realize just how painful those memories of losing some of his best friends in combat were until one Christmas about 20 years ago.  Here's our story.

I was rummaging through the attic in our home one day and came across a dusty, black box.  I wiped off the dust and opened it, finding a treasure of US Army medals inside: 2 Purple Hearts, two Bronze Stars, and a Silver Star.  I had little idea what these medals meant or the emotions they carried with them.  All I knew as a naive, uninformed 18-year old is that my dad fought in 'Nam.

That's when the idea struck me, "I'll put these in a shadow box.  He'll like that."  I talked the idea over with mom, who gave me tips on how to make the shadow box.  After finishing it, I had the epiphany, "I'll wrap it like an American flag.  He'll love it!"  I finished off the shiny wrapping with pride.  I was so excited not only to give it to him for Christmas, but to watch him open it.  Oh the joy he would experience upon opening these long lost treasures!  Right?

Christmas morning came, and it was finally my turn to give him the surprise.  I carefully handed dad the American-flag wrapped box and watched him open it.  Slowly.  He looked inside and slowly closed it.  I don't remember him saying much more than, "Thanks, buddy."  I was taken aback that he wasn't more excited.  Remember, I was naive, so I didn't understand why he wasn't more excited.  When the days and weeks passed by and I didn't see the shadow box proudly hung up somewhere, I felt sad.  Not just for me, but for him. Because that's about the time it hit me.

That Christmas season was the point when I realized these were no long-forgotten medals.  Instead, dad remembered them clearly; and he remembered too vividly how he "earned" them.  The price was his own blood and the lives of his friends, comrades, and brothers in arms.  These medals were tightly closed away, not out of forgetfulness, but simply guarding the feelings and emotions of the great soldier whose breast they once adorned.

I have scant memories of dad ever talking about his ordeals in VietNam until one day about five years ago.  I'm bad with dates, but it was probably around 2009-2010 -- nearly 40 years after returning home from war -- that I would begin hearing stories and seeing pictures that told of the times he and his men endured.  I saw pictures of men huddled around boots and rifles and tanks and trucks; pictures of men with their arms around each others' shoulders, laughing and smiling, probably in celebration that they were still alive to see another day -- probably already trying to tuck away the painful emotions that accompanied the pain and loss they had already experienced.

More than forty years later, dad seems like he is healing well.  I'm sure there's more inside, but he talks about it, actively visiting schools, spending time with troops in V.A hospitals, and speaking at events.

Today happens to be Veteran's Day 2014.  I called dad to "chit-chat" with him on this day when so many of us simply appreciate the day off of work, or the overtime allotted for working a holiday, or even the sales at the stores.  Today, he told me about his weekend.  Helping.

A program called "Never Forgotten Heros" has made its way into my dad's life.  It is a program designed to help veterans of war in Iraq and Afghanistan who suffer from physical and mental (PTSD) trauma.  Dad told me about the 3 days where he selflessly served his country yet again.  Twelve young soldiers, ranging in ages from the low 20's to the mid-to-upper 30's shared and opened up and broke down with a handful of soldiers many years their senior.  It was a time for all of them to connect in some way -- a time for the young to lean on the old; a time for the old to honorably hold up the young; a time for these senior soldiers to pass along to young warriors the encouragement and support that they so desperately needed during their own journeys toward healing.

You see, in 1969, my dad was having a whole much of metal pinned to his chest for risking his own life to save the lives of other American GI's who had moms and children and sisters and fathers at home wishing for their return.  Some gave all, but all gave some.  Now in 2014, my dad is sacrificing his own time once again to help other young heroes find healing and wholeness in their lives...one day at a time.