"My Battle Against Hitler: Faith, Truth, and Defiance in the Shadow of the Third Reich", by Dietrich Von Hildebrand (book review) 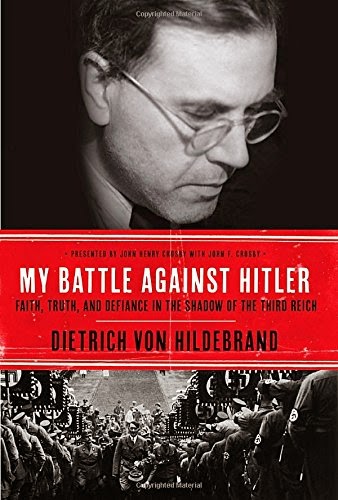 Dietrich von Hildebrand's "Mein Kampf Gegen Hitler" stands in stark contrast to Hitler's manifesto with a similar -- albeit shorter -- title.  This memoir is a work that details Hildebrand's philosophical and public opposition to Germany's Nazi party socialism of the 1930's.  Ironically, many of the issues written by Hildebrand in the '30's has validity in America.

LAYOUT: The book is divided into two pars.  The first couples the editor's commentary and Hildebrand's memoirs regarding events leading up to and surrounding the rise of Nazism and his opposition to its destructive philosophies.  The second contains thought-provoking snippets from a publication for which Hildebrand shared his thoughts.

FIRST IMPRESSIONS: We all know first impressions are important.  So I have to be honest, I thought the book was boring...until I got to about the middle.  Prior to then, I thought more could have been edited out to make it shorter and more interesting.  I really didn't find interesting that Hildebrand ate this or that dinner with this or that dignitary as they discussed the color of the sky.  I'm being facetious, but it's not far from how the first half of the book read.  After the middle, however, reading began to get interesting.  It was then that I noticed much of what Hildebrand wrote had application today.

THOUGHTS AND REFLECTIONS: I thought, "How much of a battle is it when someone simply writes about his displeasure?  Is it enough to simply speak/write?  Or should we do?"  But that's easy to ask when I live in a relatively safe America where my freedoms are not threatened if I speak out against the state.  But when one's life is at risk for speaking out against a dangerous philosophy and regime, writing and speaking is an altogether different issue.  Hildebrand wrote, "...it is precisely our struggle against evil that God wills, even when we suffer external defeat" (p. 206).  The editors remind us that Hildebrand's "struggle against Hitler was above all carried out on the battlefield of conscience" (p.240).  If you can change a person's (or a society's) mind, you can change his/its trajectory.

Have you seen any of the recent terrorist videos where a hostage is seen kneeling in the sand moments prior to being beheaded?  I've often wondered, "Why don't they resist?  Why not fight until you die?  You're no mere propaganda...FIGHT!"  Similarly, the question was asked of Germany and how it could allow the rise of Nazi socialism and racism: "Why did no one resist?" asked Hildebrand.  His answer: "There is a moment when intimidation and paralysis set in to such a degree that one becomes passive in the face of something harmful, no longer actively resisting, even though the possibility of resistance still exists" (p. 51).  Lesson learned, don't EVER give up!  Fight, speak, write -- do what it takes to oppose evil.

Robustly Catholic, Hildebrand also spoke loudly against the church.  He was one voice, but the echo in the background suggested if others had spoken up, the rise of Nazism might not have been what it was.  It appeared as though the church capitulated to the Nazi movement, hoping to gain favor in the eyes of the Fuhrer.  That hope lasted only momentarily, as eventually Hitler took off his mask and returned the church's capitulation with persecution.  Hildebrand wrote, "...rather than politicizing Catholicism, one must instead Catholicize politics" (pp. 281-282).  Once again, don't EVER give up!

I wonder if Americans are looking toward government as their "messiah", expecting the state to Solve all problems and right all wrongs.  Hildebrand addressed that, as well: "...the transformation of the face of the earth does not proceed primarily from without by means of laws of the state, but rather from within by means of the conversion of the person" (p. 282).  I think Christians today would do well to remember this truth.

SUMMARY CONCLUSION: The thoughts I've shared above serve only to spark an interest in your mind to consider reading Hildebrand's memoir.  While the early chapters were boring, I do not regret pressing forward reading to the end.  I was shocked how applicable Hildebrand's words are in today's climate.

RATING: I give this book 3 1/2 stars out of 5.  It was interesting, but the early boredom knocked it down a bit.

DISCLAIMER: I received this book free of charge from "Blogging for Books" in exchange for my unbiased review of it.  I was not threatened, coerced, or made promises in order to provide a positive review.  All opinions are mine.
at 9:20 PM