"One Minute After You Die", by Erwin W. Lutzer (book review) 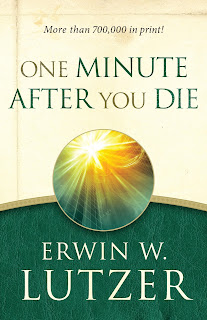 In 2nd Corinthians 13:5, the Apostle Paul instructs his readers to examine our lives to see if we are in Christ. When I was a young man, I rarely did this, and even rarer still did I ever consider the realities of death. It was always way out there over a far-distant horizon, as I though I believed that day would never arrive. As I age, however, I realize that I am already several years closer to death then I was as a young man, and realize I -- at any time -- could be checking into my appointment with death.

"One Minute After You Die", by Erwin Lutzer is a short and easy read, but is one that is full of inspiration to saints and sinners alike to examine our lives before that certain date with death.

The book's early chapters introduce the reader to a certain eternity, one of doom for the sinner, and hope for the saint. Much of the book's middle chapters deal with the hope and joy awaiting the believer who dies in Christ, while the last couple chapters explain to the sinner that death may very well usher him into eternal doom.
I was most encouraged by chapter 7, entitled, "When the Curtain Opens for You." There, Dr. Lutzer offers exceedingly great hope to the Christian who can know with full assurance that our death, regardless of the immediate cause, is ultimately in the hands of almighty God.  In Christ, we who have placed our trusting faith in Him, can die confidently.
My disappointments with the book are two-fold, however.  First, Dr. Lutzer seemed to be more interested in making his readers merely desire to gain heaven or avoid hell.  While those aren't inherently bad things, they seem to be more about seeking the reward, rather than the One who rewards.  I think it would have come across better if Dr. Lutzer had a goal to inspire the reader to love and pursue Christ more and to fervently hate sin more.  Heaven is the reward for trusting in Christ Jesus, while hell is the consequence of continuing to live in sin.
Additionally, Dr. Lutzer seemed to make some assumptive stretches in some parts of his theology.  The introduction said he wanted to look at what God's word had to say about the matter, but then made some assumptions about certain questions.  One, for instance, is the age of saints in eternity.  Will babies be older?  He suggested, if I recall correctly, that parents may even raise their children to maturity while in heaven.  But, to disagree with his positions on these matters are rather trivial, since he didn't write heretically about core doctrines of the faith.  It just came across as inconsistent.
Recommendation: This book is simple enough to read that one need not be highly knowledgeable of the language of Christianity to understand it. Therefore, it may serve as a good evangelism tool.
Rating: I give "One Minute After You Die" 3 stars out of 5. It is easily understandable and contains priceless insights that will likely inspire readers to examine their lives in preparation for death.
Disclaimer: I received this book free of charge from Moody Publishers in exchange for my unbiased review of it. All opinions are mine, and I was not coerced to provide a positive review of it.
at 6:42 AM