Get Out of that Pit, by Beth Moore (book review) 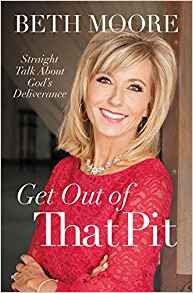 Ah-ya-ya, where do I begin?  Well, I guess I’ll just start with the cover.  I’ll be honest, any time a Christian author writes a book, and that author’s pretty face is on the cover, I’m immediately skeptical of its contents.  No doubt about it, Beth Moore is pretty much knock-out gorgeous. But does she belong on the cover, if in fact the book is about Jesus?

When I opened the book to find it was originally published in 2007, I wondered, “Why release this one for review when it’s already 10 years old?”  Then I read the back cover: “Get Out of That Pit...has sold 750,000 copies.”  Is it being re-released in order to reach that 1-million-books-sold mark? I don't know, but if so, there's nothing wrong with that, I suppose.

Ok, on to the meat of the review.  Although skeptical of Beth Moore’s teaching, I honestly tried reading this book with an open mind…guarded, but open.  However, it wasn't long before the confusion and scripture-twisting appeared.  Confusion: Beth wasn’t really clear on what a PIT actually is.  I gathered it was apparently some supposed difficult spot, life-challenge, or difficulty one finds him/herself in.  She said we could be “thrown in”, “slip in”, or “jump in”, but I didn't quite understand what a pit is.  However, she was indeed clear to point out that she was not primarily talking about pits of SIN (p. 13).  She simply described a pit as “feeling stuck” (p. 14), not being able to “stand up” (p. 16), and a loss of “vision” (p. 17), whatever all that means.

As I read, I wondered if I was being too hard on her.  Maybe she simply intended this to be nothing more than a light self-help book, a motivational tool to do better in life.  But when an author quotes scripture AND calls him- or herself a Bible teacher, the book passes over from one side of the aisle (self-help) to the other (religious).  To her credit, Beth certainly quotes a fair share of scripture.  In many cases, however, she did it badly, misinterpreting several passages outside of their original contexts.
Case in point: While introducing the "pit" idea in chapter one, Beth cited Jeremiah 38:6, telling her readers that Jeremiah's pit was simply "a place of sinking down."  A couple paragraphs later, she called it "feeling stuck" (p.15).  One needs only read Jeremiah 37:11 - 38:6 to gain a better understanding of the context of the passage cited.  There, Jeremiah had just been accused of planning to defect to Judah's enemy, and was therefore thrown into prison by the royal officials.  King Zedekiah proceeded to ask Jeremiah if there was a word from the Lord.  Jeremiah faithfully relayed to the king some not-so-good news: that the king would be delivered over to the hands of the Babylonians.  Additionally, Jeremiah spoke of the troubles that would come to the people if they refused to listen to his words.  Of course, his words weren't well received, so he was subsequently thrown into a dungeon.  A LITERAL dungeon...not a figurative place where he simply "felt stuck".  Notice that he thrown there for obediently proclaiming the words of God to a stubborn, sinful people. Knowing the message was unfavorable, Jeremiah remained steadfast and obedient.  But Beth Moore used this passage as a "moralistic" story (insert similar morals of bad sermons asking, "What giants do you need to defeat in your life?", or "What storms does Jesus want to still in your life?", etc.) to support her main theme.

Here's another example...still only in chapter one.  While trying to explain one of the ways to know you're stuck in a pit, Moore said you can know when "you've lost vision" (p.17). Moore wrote, "All image-bearers of God were intended to overflow with effervescent life, stirring and spilling with God-given vision.  That's partly what the apostle Paul was talking about when he prayed that the eyes of our hearts would be enlightened in order that we might know the hope to which Christ has called us (Ephesians 1:18)" (p.18).  Ummmmm, no.  That's actually NOT what Paul meant...not even partly what Paul meant.  He wasn't talking about some esoterical vision.  By the way, when authors/teachers use key words like "vision" and "destiny", buyer beware!  It's probably just spiritual fluff to make whatever they're trying to say sound better than it truly is. But I digress.
In the first chapter in his letter to the Ephesian church, Paul was clearly explaining what it meant to be redeemed in Jesus Christ, using words like "chosen", "sealed", "accepted", "forgiven", etc.  Paul then goes on to say that he's been praying for his brothers and sisters in Christ, that they would be granted the Spirit's wisdom and revelation (understanding) to open their eyes to know their hope in being called in Christ, to know what their inheritance in Christ is, etc. In other words, it's all about Jesus Christ!  What Beth was talking about was really nowhere close to what Paul was talking about.  Instead, she took Paul's words, twisted them to fit a flimsy idea of being stuck in a figurative "pit", and then tried to call it God's word.
Aside from poor scripture application/interpretation, not once did Beth Moore clearly present the true gospel of Jesus Christ to her readers.  Sure enough, she mentioned (in passing) words like sin, forgiveness, and the cross, but they were so strung out across the book that the gospel presentation wasn't at all clear, if present all.  I wonder if she naively thinks all of her readers are true believers in Jesus Christ who know the true gospel?  A woman of her influence would do well to recognize that there are probably several ladies who've been invited to Beth Moore-based Bible studies, or who have been handed one of her books,  because her teaching style is funny and palatable.  By the sheer numbers of people who like her style, reason would suggest not all of her readers are truly saved.  Additionally, I hope she doesn't think true believers don't need to be reminded of and encouraged in the gospel.  Her style makes me wonder if the gospel is just for "getting saved", only to be jettisoned for the real stuff later.
The gospel of Jesus Christ is for the sinner, as well as the saint.  When a grieving mother despairs over her son's untimely death due to a drug overdose, she doesn't need to know a few fancy tricks to discover and get out of a figurative pit; She needs to know that her first priority is being at peace with God through the forgiveness of her own sins through Jesus Christ alone; She needs to know that the Holy Spirit is drawing her to bow at the foot of the cross, lay all of her burdens down, and trust Jesus Christ to care for her; She needs to know that God is sovereign over life, as well as death; She needs to know that she must surrender even this tragedy over to Christ Jesus, trusting in His providence; She needs to know that she must warn others of the deadly effects sin has wrought on humanity (Romans 3:23).  Sadly, none of this was in Beth Moore's book.  There was no directing readers to the cross of Jesus Christ, and that is truly sad for a "Christian" book/author.
I recognize this book is already 10 years old, and I hope Beth Moorer's teaching/speaking/writing style has changed to be cross-centered.  But if this is who she is, and if her teachings are your source of spiritual food, then it is my opinion that you are in a very dangerous place.  This kind of teaching is dangerous because it may very well dupe you into thinking you're in Christ, when, in fact, you may actually be quite far from him because you've not truly (I don't mean completely or fully, but truly) understood his gospel.
Recommendation: Well, I don't recommend this book to anyone, quite honestly.  I'll keep it only as a reference for times when I need to help other believers caught in a "pit" to read books more carefully.
Rating: I give "Get Out of That Pit" just 1 out of 5 stars.
Disclaimer: I received this book free of charge from Handlebar in exchange for my unbiased review of it.  I was not required to provide a positive review of it.  All opinions are mine.
at 9:51 PM