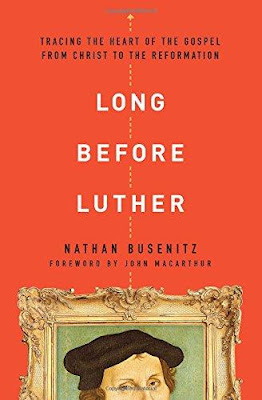 Nathan Busenitz, in "Long Before Luther", seeks to answer the question, "Did the early church teach justification by faith, or was it a 16th-century invention of the Reformers?"

Throughout 11 chapters and 164 pages, Busenitz makes it very clear that "examples abound of authors who used the language of 'faith alone' to describe salvation'" (p.161).  Not only did they describe salvation as such, but authors also wrote of the distinction between justification and sanctification, as well as the "Great Exchange": the righteousness of Christ imputed upon the sinner, and the sins of the sinner imputed upon Christ.

Regardless of whether the early church fathers wrote as they did, the Reformers' first appeal was to scripture, the final authority of all matters of faith and doctrine.  There, they drew upon Jesus and Paul, finding full assurance that the Scriptures taught justification by faith.  One such example to support their theology looked like the thief on the cross, who found justification without performing a single work.

One of the neatest chapters was the appendix, "Voices From History", where Busenitz quotes from several church fathers, tracing them through the centuries, beginning with Jesus, Peter, Paul, and John.  The list also includes Clement of Rome and Polycarp (1st and 2nd centuries) through the years to Jerome and Augustine (4th century), Julian of Toledo (7th century), and Bernard of Clairvaux (12th century), etc.  Each century is represented, and it is truly interesting to see how opponents of sola fide can claim the church fathers never taught such a thing.

But, as Busenitz shows, sola fide has been taught long before Luther.

RATING: I give "Long Before Luther" 4 out of 5 stars.  It was very good...very informative...but not a page-turner.  There was a lot of redundancy, but I suppose the redundancy was necessary since so many church fathers taught sola fide.  It's also good to be repeatedly reminded of the doctrine so that different wordings help it sink in.