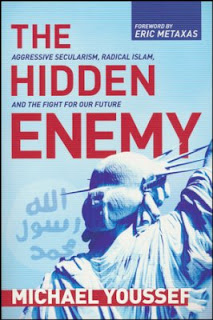 I’ve listened to and had moderately followed Dr. Michael Youssef in past years.  Having a general understanding his background, I thought this title would be interesting to read and review.  At the outset, however, I’ll let you know that this book wasn’t one of my favorites.  It wasn’t bad – not by any stretch of the imagination – but it was just kind-of ok.

The premise of the book surrounds the problems facing us (apparently Western civilization?) today, both externally and internally.  Externally, we have threats coming from radical Islamists who seek to establish Sharia law globally, while internally our media propaganda is another.

For example, on page 125, he writes, “Let’s not be cowed into silence by those who seek to conquer our civilization” (emphasis mine).  Just two pages later he writes, “How can we defend our civilization (emphasis mine) against the Islamists who seek to conquer us?”  Here’s the issue: Nations rise and fall at God’s direction.  None arises a moment sooner than He commands, and not a single one will last even one second beyond God’s decree.  The Bible and God's timetable of events is not centered on Western civilization; nor should our theology.

The resounding passage of the book came from John 14:6 – “I am the Way, the Truth, and the Life. No one comes to the Father except through Me.” – Jesus.  While Dr. Youssef frequently quoted and explained (albeit, very softly) this passage, especially in the light of the current trend that our civilization seems to think all paths are equal paths to God, I was left wondering if an unbeliever reading this book would understand the gospel of Jesus Christ.

Instead, there was just the soft, easy gospel approach that is all too common in the West.  It wasn’t heretical theology; just soft.  That said, I know and believe God is faithful to use His word to accomplish His purposes to His glory, even where and when we are flawed or limited our presentation of it.  So, I can at least give Dr. Youssef credit for not altogether ignoring it.

Overall, the book was an easy read peppered with current events that support his position about the enemies proposed at the beginning of the book.  I’ll not spoil the end of the book, where he explains who the “hidden” enemy is.  It wasn't a surprise, but if you're still interested in reading it, then it at least won't be spoiled by me.

Rating: I give this one just 2 ½ stars.  It wasn’t bad, but I simply wasn’t interested, and it didn’t keep me deeply engaged, and the gospel message could have been better presented.  I certainly would have been disappointed if I had paid the suggested $16.99 for it.

Disclaimer:  I received this book free of charge from Tyndale House Publishers in exchange for my unbiased review of it.  All opinions are mine, and I was not required to provide a positive review.
at 5:01 PM