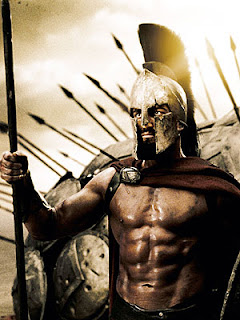 By now, you've likely heard "Courageous" by the Christian band, "Casting Crowns".  If not, well, that's ok.  The song serves as the theme song for the movie by the same title. Well, I've grown tired of the song.  Not only because I've never been much of a Casting Crowns fan, but primarily for its message.  (I'll spare you the details on why I dislike the musicality of the song.)
Message: The notion Casting Crowns presents on what courage is and where it comes from is bothersome to me. The lyrics say this: "We were made to be courageous...Lord, make us courageous."

Here's my first question: If we were already MADE to be courageous by God, then why do we need to ask Him to MAKE us courageous all over again? Didn't CC just tell us God already did that? It's like asking God to make you closer to Him; It just doesn't come without sacrifice and effort. It's why Joshua was told to "be strong and very courageous." Are we to think that was the first time Joshua ever faced his fears with courage?  Likewise, Paul tells us to stand guard over our lives, to stand firm in faith. The imperative was never to ask God to MAKE us firm, but to BE firm.

I think Christians waste too many breaths asking God for things rather than practicing what He has already made possible in us. How many people do we know (because we all know it's not US we're talking about here) who ask God for more patience in dealing with a certain situation, or more you-fill-in-the-blank? Why ask? Control your head; Take charge of your emotions; Exercise patience! Initiate honesty...generosity...whatever!

Courage doesn't come by simply ASKING God to make us courageous. It doesn't come by singing louder with a trendy tune. Instead, courage only shows up through hard growth, just like everything else in life that is worthwhile. In his book, "Why Courage Matters", Sen. John McCain said "we become courageous by doing courageous things."  No great warrior ever woke up as a newborn and said, "Today I will conquer the world!" No, he fought small battles on the playground for his girlfriend-of-the-week, she trained, he practiced, she stood up to a bully, he confronted a dishonest employee, she exercised, he bled, she sweated. The warrior built up his courage to the point where it became his nature to rush into enemy fire when the odds were heavily stacked against him; to rescue his fallen comrades as he dragged his own leg behind him.

Stop simply praying for God to help you lose weight; to help you regain control of your finances; to help you speak up and share the gospel. Just do it! Exercise what you know is the right thing to do. Seek wise instruction on how to get you moving in the right direction.  Build up your courage today, and tomorrow you'll have a little bit more courage (or patience, or self-control, or...) to face the bigger battle that faces you on Tuesday.